The River of No Return by Bee Ridgeway 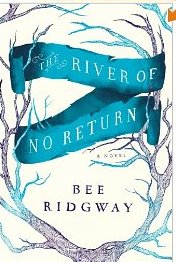 The River of No Return was an ARC published by Dutton.

Book Description:  “You are now a member of the Guild. There is no return.” Two hundred years after he was about to die on a Napoleonic battlefield, Nick Falcott, soldier and aristocrat, wakes up in a hospital bed in modern London. The Guild, an entity that controls time travel, showers him with life's advantages. But Nick yearns for home and for one brown-eyed girl, lost now down the centuries. Then the Guild asks him to break its own rule. It needs Nick to go back to 1815 to fight the Guild’s enemies and to find something called the Talisman.
In 1815, Julia Percy mourns the death of her beloved grandfather, an earl who could play with time. On his deathbed he whispers in her ear: “Pretend!” Pretend what? When Nick returns home as if from the dead, older than he should be and battle scarred, Julia begins to suspect that her very life depends upon the secrets Grandfather never told her. Soon enough Julia and Nick are caught up in an adventure that stretches up and down the river of time. As their knowledge of the Guild and their feelings for each other grow, the fate of the future itself is hanging in the balance.

Part time travel, part romance, part historical fiction, The River of No Return did not work well for me.  I've tried a number of time travel novels, but for some reason, most simply don't deliver a scenario that makes any kind of sense, and although I'm not opposed to a little romance in a novel, I don't really care for romance novels.

While the book will appeal to many readers, it was a bit ho-hum for me.  When I finished the 464 pages and discovered it was the first in another trilogy (aren't there a lot of those out there?), I knew it was not one that I would pursue.  It isn't that I don't like long books, I love them.  Or that I don't like trilogies, I do.  This particular one simply didn't interest me enough to seek future installments.