The Scourge by A.G. Henley 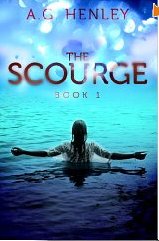 The balance seems exceptionally uneven; the only explanation given is tradition, which doesn't really clear up the details of why their living arrangements are not more cooperative and codependent in areas other than water and protection. So...while I liked the idea of two different societies divided by their dwelling places, the relationship between them felt sketchy and indefinite.

Plot:  Fennel is a sightless Groundling, the Water Bearer, who is the only one able to move among the creatures safely.  Her "Keeper" is  a Loftie named Peree, who shoots any creature that may become threatening as the blind girl hauls water for both groups.  Why only one Loftie  as a protector?  Shouldn't all the Lofties be active in defense of the Water Bearer who provides water to sustain both societies during times when the scourge are present?

The first part of the novel was intriguing, and I liked the building of trust between Fennel and Peree.  The latter part of the novel didn't interest me as much, but does give the explanation of the scourge. The concluding chapters also unravel some of unusual relationships among families and other secrets among both Groundlings and Lofties, but ending feels abrupt.

I think YA readers will enjoy the novel, especially the relationship that develops between the Water Bearer and her Keeper.

Finalist for the 2013 Next Generation Indie Book Award (YA Category)