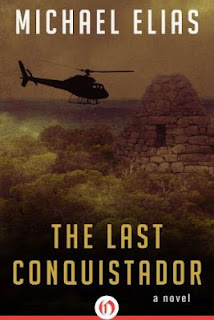 The Last Conquistador by Michael Elias.  I really thought I'd like this one based on the description, but it got way to fantastic for me.   (I know.  That IS saying a lot).

The novel started out well with the discovery by archaeologist Nina Ramirez of two mummies of children on a Peruvian mountain top; I like archaeology and am interested in the Incan civilization.

The discovery of an intact Incan civilization, complete with pyramid, deep in the jungle and hidden by an overhead canopy, however, was far beyond my ability to "suspend disbelief."

The Incans did sacrifice children, but usually by a blow to the head (they were drugged) or simply leaving them to die of exposure on the mountain tops.

Adam dePalma, the FBI agent, is a descendant of Pizzaro, and all of the Incans recognized him immediately as he looks exactly like Pizzaro!

The characters were cardboard, but little in this novel was believable, so it didn't matter much.