Mission to Paris by Alan Furst 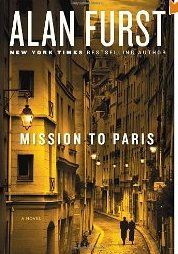 Mission to Paris is the second novel by Alan Furst that I've read, and both of them were excellent.  The Boston Globe described Furst as "the grandmaster of the historical espionage genre,"  I'd certainly put him up there with le Carre, Follet, and Ludlum, although Furst's style is different and his focus is on the period right before or during WWII, a period I enjoy reading about.  This novel takes place shortly before the fall of France.

Set in 1938, Paris is full of tension:  the climate is an odd mix of desperate fear of a German occupation, an insouciance of deliberate unconcern, and a forlorn hope for an appeasement that will spare France.  The devastation of WWI is still fresh for the French, and while no one wants war, some realize that it is inevitable to preserve their way of life, while others sympathize with fascist philosophy.

Furst, who lived in Paris for a number of years, does an excellent job of setting the scene both physically and emotionally.  Fredrick Stahl, Furst's protagonist, is an American actor who has arrived in Paris to make a movie.  Jack Warner himself was behind the move, which apparently puzzles a few people, but Stahl, who had lived in Paris in the twenties, loves Paris. He cannot, however, avoid the atmosphere of worry and tension that permeates the city.

Born in Vienna (although he  left at sixteen), Stahl already has a strong distaste for the Nazis, but is unaware of how the Germans have already infiltrated the Parisian scene, paying influential officials to espouse Rapprochement, a policy of keeping cordial relations with Germany (and subversively, preventing armament or preparation for war).  When first approached socially by German representatives, Stahl is careful, but he becomes resentful of efforts to turn his words into propaganda.

The wooing of Stahl by the Germans is first by inducements, then by implied threats.  What if he uses the opportunities to gain vital information?  He is an actor, after all.  And so Stahl take a step toward espionage....

Suspenseful and well-written, Furst makes the most of the background and of his characters.  An engrossing read for those who love spy novels or novels about WWII.