Death on a Pale Horse by Donald Thomas 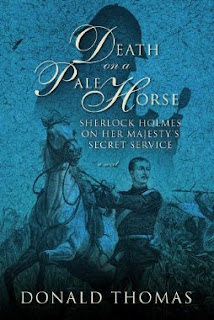 Death on a Pale Horse:  Sherlock Holmes on Her Majesty's Secret Service  will be released on March 6.  Another Sherlock Holmes pastiche, the novel kept me glued to the pages (so to speak, it was an ebook), and I enjoyed it as much as the earlier pastiche by John Gardner featuring Moriarty.

Thomas is a prolific writer in both fiction and nonfiction: "His biography of Robert Browning was short-listed for the Whitbread Award and he received The Gregory Award from T. S. Eliot personally for his poetry collection Points of Contact."  from the Amazon page

Holmes and Watson, with Mycroft's aid, are determined to keep the evil
Colonel Moran from creating chaos and war across Europe.  Intent on revenge, Moran has staged a massacre of a British force by Zulu tribesmen,  the murder of the heir to the French throne, forged dispatches to heads of state, and other events geared to cause death and destruction.  Initially, no one knows that one man has engineered these disasters, but Holmes, Watson, and Mycroft set their sights on Moran and pursue him with a vengeance.

From Net Galley and Open Road Media, I thoroughly enjoyed this novel and am glad to have discovered another "new to me" author.