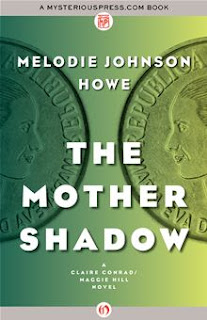 Here is the Net Galley blurb:

After a suicide, two oddball female sleuths investigate a coin collection that is anything but small changeMaggie Hill’s life has become temporary. Her marriage was temporary, her jobs are temporary, and if work doesn’t pick up, her time in California might be temporary, too. Her latest employer is Ellis Kenilworth, an aging coin expert with a first-rate collection and a tenth-rate family. One morning, he has Maggie type up a codicil to his will, changing the document so that his million-dollar rare-coin collection goes not to his kin, but to a woman named Claire Conrad. By the end of the day, the codicil has vanished, and Kenilworth has killed himself with a shotgun.  When the hyena-like family starts to circle Maggie, she reaches out to Conrad. The heiress is an eccentric private detective who wears only black and white—and whose sense of honesty is as clear-cut as her wardrobe. Together, they fight to protect an old man’s final wish, battling against a family so greedy that they would steal the coins right out of the dead man’s hand.

Although the book has flaws and is certainly dated (shoulder pads and panty hose), I loved the idea of these three sleuths (can't overlook the handsome, multi-talented English butler) and look forward to the second book, Beauty Dies, originally published in 1994, because I feel sure that the characters continued to develop.  I'm sorry the author decided to end the series before the characters had a chance to pursue more adventures, but I think I'll look for Beauty Dies anyway.