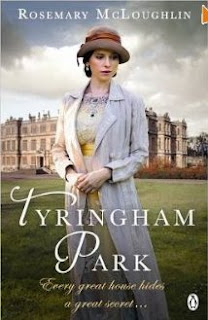 Tyringham Park, an ARC from Penguin, begins in 1917 when the youngest daughter of the manor disappears.

Despite a thorough search for the child, and theories from abduction to the toddler falling into the river and being swept out to sea are considered.

Charlotte, the older sister is only eight, and certainly not the favored child.  It is Charlotte's story that unfolds in the novel.

I'll be quick--don't think the cover suggests similarities to Downton Abbey.  Few of the characters are likable, and although it took a while to realize that things were not going to improve, I stayed with it to an unsatisfactory conclusion.