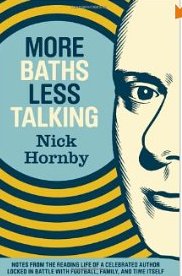 More Baths Less Talking:  Notes in the Reading Life of a Celebrated Author Locked in Combat with Football, Family, and Time Itself  is another winner for Hornby.

You, the reader, will pay by adding a multitude of books you have never heard of on subjects you probably never intended to read about.  But you will also be enriched and amused by the irreverent descriptions of the books Hornby includes in his columns for The Believer Magazine, the literary, arts, and culture magazine founded by Dave Eggers.  Yeah.  Dave Eggers.

At least that is what I did.  Add books to my list.

I was, actually, already interested in David Kynaston's Austerity Britain, and I still am, but perhaps with more intention than before reading Hornby's review.  I wasn't familiar with Francis Spufford's The Child That Books Built, which is mentioned as a bit of an aside to his review of Red Plenty, but I'm more interested in a book about "what we read when we're young and why" than in Khrushchev's planned economy.

Then there's Live From New York; An Uncensored History of Saturday Night Live by Tom Shales and James Andrew Miller.  Since the show wasn't broadcast in Britain, Hornby had no idea who Dan Aykroyd, John Belushi, and Bill Murray were.  Of course, the show is an American icon, and I think I'd get a kick out of it.

The Conversations:  Walter Murch and the Art of Editing Film by Michael Ondaatje, I mentioned in a previous post and is definitely on the list.  And David Almond's My Name is Mina, a children's book-- but I've got to have it after reading what Hornby had to say.

Enough already.  You get the idea.  If you read this book of essays, you will extend your TBR list and chuckle while you do.