The Three Lives of Tomomi Ishakawa by Benjamin Constable 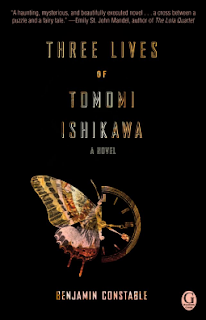 The Three Lives of Tomomi Ishakawa

Book Description:  What writer Benjamin Constable needs is a real-life adventure wilder than his rampant imagination. And who better to shake up his comfortable Englishman-in-Paris routine than the enigmatic Tomomi “Butterfly” Ishikawa, who has just sent a cryptic suicide note?

She’s planted a slew of clues—in the pages of her journal, on the hard drive of her computer, tucked away in public places, under flowerpots, and behind statues. Heartbroken, confused, and accompanied by an imaginary cat, Ben embarks upon a scavenger hunt leading to charming and unexpected spaces, from the hidden alleys of Paris to the cobblestone streets of New York City.

I thought I'd love this one, the book description sounds so intriguing.  The first few pages charmed me, and I liked the idea of the clues, but somehow even those didn't quite measure up.  I wanted to like Butterfly, but even though her voice was alluring, the content of the clues, journal pages, notebooks became less and less pleasant.  Benjamin Constable was not particularly likable, either.  Sometimes he simply grated on my nerves.  By the conclusion, I really didn't care what happened to either of them or whether any of it was real.

Pros:  The cover is beautiful.  The concept was interesting.  Cat was my favorite character, and Cat was definitely imaginary.

Cons:  Too clever by half.  Like cotton candy--pretty to look at, not very filling.