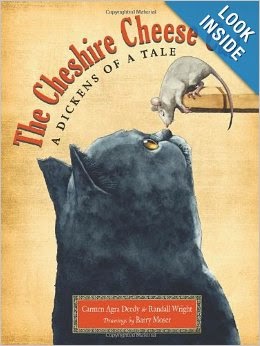 The Cheshire Cheese Cat:  A Dickens of a Tale is a delightful book for young and old, especially if you appreciate Charles Dickens.

What I liked:  almost everything!

I liked the story of Skilley the cat and Pip the mouse and their friends.  Skilley is a street cat, and he is delighted when a mouse infestation at the Cheshire Cheese Inn results in his being taken in as resident mouser.    But Skilley has a secret that he certainly doesn't want revealed.

Pip is a highly educated mouse who can read and write.  He loves big words, much to the confusion of his friends.  Pip discovers Skilley's secret, and the two develop a friendship that benefits them both.

And then there is Maldwyn, the Tower Raven who escaped and is being kept hidden.  Tower Ravens have been important at the Tower of London for centuries.  The legend that if the ravens leave the Tower, the kingdom will fall insures that they are highly valued and cared for.  Maldwyn regrets his escape, and Queen Victoria is very eager to have him returned.  (Today there are still the six ravens present  (as ordered by Charles II), plus some spares that occupy the Tower.)

I loved Pip and Skilley, the real characters who played small roles, and the allusions.

Pinch is a cat that the barmaid has renamed Oliver, but note the allusion:


Well, this was an unwelcome twist."

Some of Dickens' friends, including Wilkie Collins, Thackeray, and Edward Bulwer-Lytton visit the Cheshire Cheese Inn.  Thackeray loved red peppers which gave him heartburn.  The following quote references Thackeray's misguided decision to eat his beloved peppers and Bulwer-Lytton's The Last Days of Pompeii:


On Thackeray's affection for red peppers, Dickens' comments:  "They will be the death of him yet."  And they did, actually, play a role in Thackeray's death, although Dickens' remark is just an amused comment on Thackeray's self-induced indigestion.

Can a cat and a mouse live together in harmony and friendship?  "'I have great expectations, said Mr. Dickens.'"

The above are a few of the allusions I caught.  Some are so obvious that no one could miss them:  "He was the best of toms..."  There are several I didn't mention, and more than likely, quite a few that I didn't even catch!


A Glossary of Terms at the end defines some of the big words (or archaic ones) that Pip uses, although Pip often explains them himself.  A great vocabulary builder for young readers.

And (for my friend Thomas), I enjoyed the information about Typeset at the end.

This is a charming book for people of all ages!  While  younger readers will not catch all the references to  Dickens and his friends, perhaps when Dickens is introduced to them, they will have a favorable "expectation" of enjoyment.  Highly recommended.