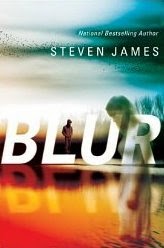 Mystery and paranormal combined, the title refers to the blurring of reality that occurs when the young protagonist Daniel attends the funeral of a classmate who drowned.  Daniel, who knew Emily Jackson only by sight, is horrified when he has a vision of Emily sitting up and grabbing him, insisting that what happened was not an accident and that Daniel needs to find out what happened.

Daniel struggles with his visions and his investigation with the help of his friends.  Who would have killed Emily and why?  Sometimes the blur between the visions and reality become so unclear that Daniel isn't sure about the separation.  As Daniel and his friends work their clues, Daniel finds himself suspecting a number of people--including his best friend and himself.

An entertaining mystery with a supernatural aspect that works well.

Steven James is the bestselling author of nine novels that have received wide critical acclaim from Publishers Weekly, New York Journal of Books, RT Book Reviews, Booklist, Library Journal and many others. He has won three Christy Awards for best suspense and was a finalist for an International Thriller Award for best original paperback. His psychological thriller The Bishop was named Suspense Magazine's book of the year. Publishers Weekly calls James "[A] master storyteller at the peak of his game."