You by Austin Grossman 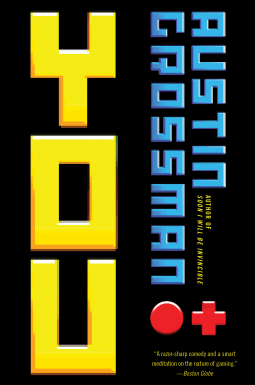 I'm at a loss about how to review or rate YOU.  I'm no gamer and have no idea about programming, early or late computer games, game development, or various computer languages.

When Russell joins Black Arts games, brainchild of two visionary designers who were once his closest friends, he reunites with an eccentric crew of nerds hacking the frontiers of both technology and entertainment. In part, he's finally given up chasing the conventional path that has always seemed just out of reach. But mostly, he needs to know what happened to Simon, his strangest and most gifted friend, who died under mysterious circumstances soon after Black Arts' breakout hit.

As the company's revolutionary next-gen game is threatened by a software glitch, Russell finds himself in a race to save his job, Black Arts' legacy, and the people he has grown to care about. The deeper Russell digs, the more dangerous the glitch appears—and soon, Russell comes to realize there's much more is at stake than just one software company's bottom line.


Austin Grossman (born 1969) is a writer and game designer who has contributed to the New York Times[1] and a number of video games.

He is the author of the novel Soon I Will Be Invincible, which was published by Pantheon Books in 2007.[2] His second book, entitled YOU, debuted in April 2013.[3]Grossman started his career in the game industry replying to a classified ad in The Boston Globe in May 1992 that led him to Looking Glass Studios. Since then, Grossman has worked with DreamWorks Interactive, Ion Storm of Austin and Crystal Dynamics.
Grossman, born in Concord, Massachusetts, attended Harvard University and is currently a graduate student in English literature at the University of California, Berkeley.[2] He is the twin brother of writer Lev Grossman and brother of sculptor Bathsheba Grossman, and the son of the poet Allen Grossman and the novelist Judith Grossman. Grossman is currently working at Arkane Studios


I learned a good bit about how complicated it is to create and produce an interactive video game.  Whew!  Pretty overwhelming.

The Not-so-good:  At least for me, the novel was way too complicated for my limited knowledge and abilities.  I'm not smart enough to understand anything about computers other than point and click.  The lengthy discussions about both the mechanics and the narrative story lines of various computer characters were initially interesting, then pretty exhausting for me.  I found myself skimming on numerous occasions.  If I'd so much as played any of these games, I'm sure I'd have found things more interesting, but after  several lengthy sections relating game narratives,  these sections became numbing.

Overall:  Unless you are very computer literate or seriously involved in the history of gaming or in playing various games,  this novel (?) might not be a great choice.  If the real characters and a more satisfactory "real" plot had been more developed, I would have like it much better.

I'm glad I read it, but I remained confused much of the time.