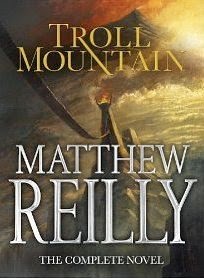 I've not read any other books by Matthew Reilly, but I gather that this is his first novel for young people.  It is entirely suitable for his audience.  Character development is limited, but it is the familiar hero's quest and meets all of the requirements for this genre.

Book Description:  A dauntless young hero.An army of brutal monsters.An impossible quest.Journey to the mountain …In an isolated valley, a small tribe of humans is dying from a terrible illness.
There are rumors, however, that the trolls of Troll Mountain, the valley’s fearsome overlords, have found a cure for the illness: a fabulous elixir.
When his sister is struck down by the disease and his tribal leaders refuse to help him, an intrepid youth named Raf decides to defy his tribe and do the unthinkable: he will journey alone to Troll Mountain and steal the elixir from the dreaded trolls.
But to get to Troll Mountain, Raf will have to pass through dangerous swamps and haunting forests filled with wolves, hobgoblins and, worst of all, the ever-present danger of rogue trolls …The journey to the mountain has begun.

And there you have it.  The novel is exactly what it says it is and is certainly something young readers might enjoy.  On the other hand, there is little character development (and Raf, the young hero, and Ko, the mysterious old man, are worth more development).  The adventures move too quickly and feel abbreviated.  Maybe it would make a good manga--it would certainly lend itself to illustration.
Interestingly, this novel was published as a novella series first, then the three novellas combined for the final version of the novel.  Even as a complete novel, it felt rushed and awfully short.
An example of "fantasy light"--that will engage young readers, but leaves a lot to be desired for most adults.
NetGalley/Momentum Books
Fantasy/YA/Juv.  May 20, 2014.
Posted by jenclair at 7:30 AM

Labels: fantasy, juvenile, once upon a time challenge, YA