The Book of Lost Things 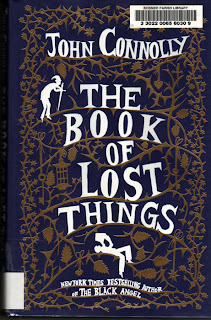 Connolly, John. The Book of Lost Things. This book fits best into the fairy tale genre and is a book that might have pleased Jung. David is twelve when his mother dies, and he has spent a lot of time performing various rituals, hoping to prevent her death: putting first his left foot on the floor when he gets out of bed, then his right; counting to twenty when he brushes his teeth, touching faucets and door handles a certain number of times, trying to keep numbers even.

It is through his mother that David has formed his attachment to books; the love of reading was one of their shared bonds, and "Before she became ill, David's mother would often tell him that stories were alive."

The language at the beginning of the novel, as David first fears, then grieves his mother's loss, is particularly beautiful:

"Stories were different, though: they came alive in the telling. Without a human voice to read them aloud, or a pair of wide eyes following them by flashlight beneath a blanket, they had no real existence in our world. They were like seeds in the beak of a bird, waiting to fall to earth, or the notes of a song laid out on a sheet, yearning for an instrument to bring their music into being. They lay dormant, hoping for the chance to emerge. Once someone started to read the, they could begin to change. They could take root in the imagination, and transform the reader. Stories wanted to be read, David's mother would whisper. They needed it. It was the reason they forced themselves from their world into ours. They wanted us to give them life."

And this is a book where the stories do come alive, if turned on their heads. The stories, altered from their original forms, are part of a journey, a quest that must be undertaken for David's survival. There is much more at stake than a material treasure; this is a hero's journey in which David acquires knowledge that will benefit both himself and others.

Of course, one thing I was glad to see was that unlike Nathaniel and Cadell (from The Amulet of Samarkand and Evil Genius), David is likable in spite of his difficulties and does receive help from mentors and parental figures along the way. His original goal is worthy, if unrealistic, and when he recognizes what the true point of his journey is, he embraces it.

Labels: fairy tale, once upon a time challenge