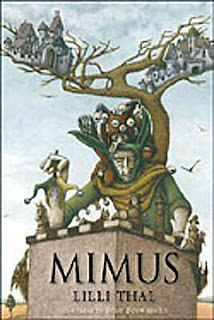 Thal, Lilli. Mimus. This YA novel opens with a young prince and his friends taking part in some typical escapades in the kingdom of Moldavia. Then word arrives that Prince Florin is to join his father who has been involved with peace negotiations with Vinland and will be escorted there by Moldavian soldiers. Florin is thrilled to be a part of this historic event--the whole idea is exciting. On the trip to Vinland, however, the young prince sees the devastation caused by years of war and his romantic visions receive their first jolt.

Worse is to come. King Philip, Florin's father, has been betrayed and imprisoned with his surviving retainers in the dungeons of King Theodo of Vinland. Florin is forced into apprenticeship with Theodo's jester, Mimus. The prince is stripped physically and emotionally as he moves from the exalted position of prince, to the one of the lowest positions in this medieval society. His head is shaved, he is fed gruel once a day, and he is forced to behave like a Fool. His one attempt at escape brought a terrible punishment on his father, so Florin can not even hope to make another attempt.

Survival comes at a great cost and requires great courage, but Florin does survive. And learn-- about revenge, friendship, the humanity even of enemies, the inhumanity that can result from too much power, the effects of war, and more. There are some harsh realities in this YA novel, but there is great compassion as well.

Although I've barely mentioned Mimus, his character is vital, complex and fascinating. There is no novel without him, but you need to meet him for yourself.

This is an excellent YA novel that doesn't skimp on development and doesn't condescend to its readers. I found it on the YA shelves at the library and had never heard of it before, but after 3 disappointing YA fantasy novels, I really wanted one that I could like.

I just found this study guide for teachers which looks excellent.

Labels: fantasy, once upon a time challenge, YA