Mistress of the Art of Death 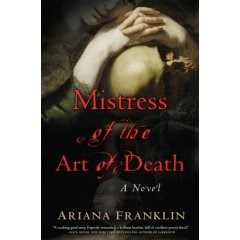 Franklin, Ariana. Mistress of the Art of Death. The novel takes place in 1171, when Adelia, a female doctor from Salerno is sent with Simon of Naples to Cambridge in hopes of discovering who has murdered three children. Adelia is accompanied by Mansur, an Arab who functions as her bodyguard. All three are outcasts of a sort: Simon is himself a Jew; Adelia is an Italian, the foster daughter of a Jew, and a woman doctor (a coroner, actually) from the only place that allows women to become doctors, Salerno, Italy; and Mansur is an Arab eunuch, castrated by monks to preserve his singing voice--they are truly foreigners and outcasts.

While Chaucer is never mentioned, the pilgrimage, Thomas a'Becket, and the Nun's Tale all have their place in this thriller.

The Jews have been blamed for the murders of the children, and the incensed villagers have already murdered two Jews and are threatening the rest, who have been taken into the castle for protection. The atmosphere is volatile, and Henry II wants the situation resolved without having to expel all of the Jews from England, as they are a large source of his income.

The characters are the kind that reach you; not only the main characters, but many of the minor characters hold great charm. In spite of the murder of the children, Franklin's humor inserts itself into the lives of the villagers and the investigators.

Although Henry II is best remembered in connection with the martyred Archbishop of Canterbury, I've always retained an admiration for his creation of a system of common law that standardized some punishments and allowed for a jury process that helped create a more uniform legal structure with some sense of equity. He also instituted land reforms and protected tenants against their landlords. All of this was to his benefit, of course, but our legal system has its roots in Henry's common law. William Churchill considered Henry II to be England's greatest king.

Henry II plays only a small role in the novel, but his influence on events is huge, as he is the one who sent to the King of Sicily a request for the three investigators.

The author admits to some anachronisms that she felt helped the story, but I have to admit that nothing bothered me to the point of being distracted.

I'd love to see Adelia, Rowley, Prior Geoffrey, Gyltha, and Ulf again, and hope that Franklin will consider letting them join forces in solving future crimes.