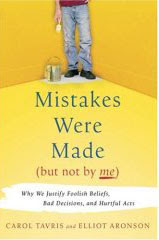 Tavris, Carol, and Elliot Aronson. Mistakes Were Made (but not by me): Why We Justify Foolish Beliefs, Bad Decisions, and Hurtful Acts. I thought I knew all about self-justification, but no, my understanding didn't begin to account for the 90% of that iceberg, submerged and out of sight.

The introduction is titled Knaves, fools, Villains, and Hypocrites: How Do They Live with Themselves? The answer is-- the same way we do. They justify their actions.

When we make a mistake or do something foolish or hurtful, we experience cognitive dissonance. Since we think of ourselves as basically good people, when our behavior threatens our self-concept, we are almost compelled to justify our actions in order to reduce the dissonance. For most of us, our transgressions are relatively small, but what about those who have proceeded to much larger and more serious errors? How did they get there, if they really are decent people? Tavris and Aronson state it very simply: one step at a time. One lie can lead to another, and bigger, lie. One act of dishonesty can lead to another. If we justify the first, it is easier to justify the second. The individuals in the Milgram study began with small shocks and proceeded upwards. From ten volts to 450 volts. This study has always fascinated me, but Tavris and Aronson conclude that not only do we move toward bad/corrupt/cruel/foolish behavior one step at a time, but we also tend to blame our victims...they deserved it, they were stupid, they were stubborn. Because those individuals who were administering the "shocks" were decent people, they had to justify their willingness to "inflict" pain.

This is a fascinating book, and the authors take the reader through example after example, study after study. Why would a prosecuting attorney refuse to change his opinion after DNA proved that the accused was not guilty? Why can't psychologists, doctors, police, politicians, husbands, wives, teachers, students, bosses, employees... admit they made mistakes? What procedures and strategies are at work? The authors reveal the process, revealing how easy it is to compound and magnify our errors because we are so busy justifying our decisions.

From marital disagreements to war crimes, almost without exception individuals try to justify their behavior to ease cognitive dissonance. The latter part of the book concentrates on acknowledging mistakes rather than excusing them, being aware of the process and consequences of self-justification, keeping an open mind, and not "jumping to convictions."

There is way too much in this little book for me to cover, but I recommend it to anyone who enjoys psychological and sociological studies. Sometimes floored, sometimes angry, sometimes sad, sometimes amused, but always interested, I can only hope that I will be able to apply some of what I learned in my own life. This book was an Advanced Reader Copy, and my thanks, again, to Anna Suknov for sending it.