Goodwin, Jason. The Janissary Tree. Goodwin, who has written a history of the Ottoman Empire, Lords of the Horizons , has turned his hand to a series of mysteries set in Istanbul in the 1830's.

Istanbul/Constantinople is such an exotic setting and the Janissaries have such an intriguing background, that even if I hadn't noticed earlier this year that this novel was nominated for the Macavity Award, I would have been tempted.

Permit us to introduce Yashim,
a most extraordinary man.
Intelligence agent par excellence. Confidant of sultans.
Trouble shooter. Linguist. Chef. Eunuch.
I liked the above little introduction from the jacket so well, I had to use it. I just noticed it and think it so fitting.

Four promising young cadets from the New Guard have been kidnapped and are being murdered in grisly and symbolic ways. A member of the Sultan's harem is murdered. And who has been called in to solve these seemingly unrelated murders, but Yashim...

For the first 16 pages, I wasn't much impressed, and I put the book down and went on to read Elizabeth's German Garden. When I came back to The Janissary Tree, however, I found myself becoming involved with Yashim. From then on, putting the book down was next to impossible.

The historical parts captured my attention and interest, and Yashim's character began to fascinate me. In the end, Goodwin had me engrossed with the history of the period and with the characters. His next Yashim mystery is due out this fall, and I will be sure to catch up with Yashim, "a most extraordinary man"; Stanislaw Palewski, the Polish ambassador; the sultan's mother and lender of French novels, Aimee'; Preen; and (hopefully) Murad Eslek. Since the Russian ambassador's wife departed with her husband (who was forced to return to Russia), I suppose she is gone for good, but I liked her hutzpah. 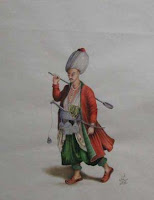