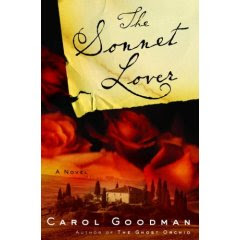 Goodman, Carol. The Sonnet Lover. If you've read Goodman before, you realize that she likes creating a sort of microcosmic world in some way connected to academia, and preferably set in a way that isolates its small community (usually a school) somewhat. No surprise here. Rose Asher, a professor at Hudson College in New York, tries to avoid returning to La Civetta, a villa in Florence that hosts the college's summer program. Having been a part of the summer program twenty years ago as a student, Rose is not eager to revisit her past and her lost love, but circumstances eventually persuade Rose to return, ostensibly as an adviser for a film based on the possible connection between Shakespeare and Ginevera de Laura, who may have been Shakespeare's "Dark Lady." There are other reasons for Rose's return to La Civetta, however, and not all of them is she willing to acknowledge.

A light, literary mystery with lots of Italian atmosphere. I love all of the literary allusions that Goodman scatters throughout the novel - sonnets, poets, works of literature and art all find their way in. There is a brief appearance by an Anglican nun whose mother, fond of Virginia Woolf, names her Clarissa Dalloway; a reference to one of the theories Stephen Greenblatt mentions in his biography Will in the World: How Shakespeare Became Shakespeare; a version of that despicable folk tale Patient Griselda; several direct references to Elizabeth Browning who is buried in Florence, and an indirect (maybe) reference to Robert Browning's My Last Duchess ( the story sounds too similar to be a coincidence) -- lots of fun literary tidbits.
I'd love to have seen what an author like Wilkie Collins could have done with the premise...it would have become a much denser novel, and I like dense. Goodman has written an enjoyable mystery that takes place in contemporary times, but is linked to another--perhaps more interesting--mystery involving the Italian poetess who may have been Shakespeare's "Dark Lady."
I keep wanting more than Goodman gives, but her novels are quick reads and entertaining.
Fiction. Mystery. 2007. 350 pages.
Posted by jenclair at 9:48 PM